Jonus: scene 1 slide 1
Jonus works in an office. He has worked in this office for 20 years. He wants more but he doesn't know how to get more. Jonus feels anxious and threatened. Jonus: scene 1 slide 2
Jonus would dwell on detail. The detail would observe him. For hours Jonus would stare and ponder. Stance could feel the coldness. It worried her. It took her concentration. She new things were visualizing and as they appeared to become real Jonus looked more and more dangerous. Jonus was now disappearing into himself daily. Stance could hear water, feel heat and feel weight. She knew it was anxiety. She had to take action. Jonus: scene 1 slide 3
Into his mind did Jonus leap. His rock was safe. The river flowed strong. The flames were growing. Impending doom. Impending fear. Anxiety glassed his lungs. There was nothing to do but fall. The time is now. It was to happen. Jonus was lost from control. He needed to sleep. As long as the river flowed he could sleep. Sleep Jonus demanded of himself. Jonus: scene 1 slide 5
Jonus felt the heat of each flame. He rested for a moment and perched within contemplation he waited for something to happen. And happening did pass him by. Jonus couldn't tell if it was an angle, spirit or memory but it knew him. In a fleeting moment the happening reflected a transcendental understanding. “You will be confronted and you will become frustrated, angry and full of hate. It will happen and you will gain control through revenge. In a short moment you will understand me and through misadventure become me.” Jonus understood a contract was made but couldn't be sure consent occurred. Motionless Jonus contemplate fate and reflected on his many missed opportunities. Jonus and the 3 sisters
Jonus: scene 1 slide 6
And then  the three sisters motioned towards Jonus. They were beautiful in threat, size and power. Veiled with petals of flame their beauty radiated. Jonus was in want. Wake up Jonus the sisters giggled. You have much to do. Your journey to enlightenment is to begin. We have waited so long for you to be with us. 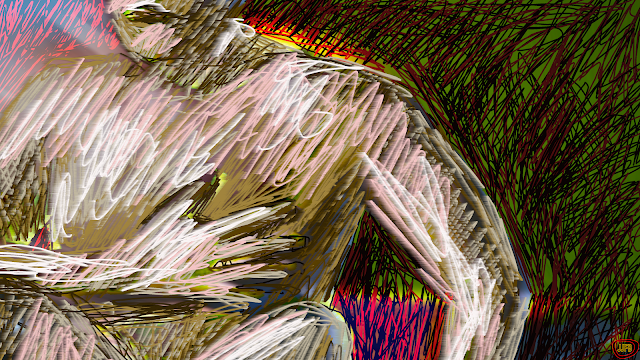