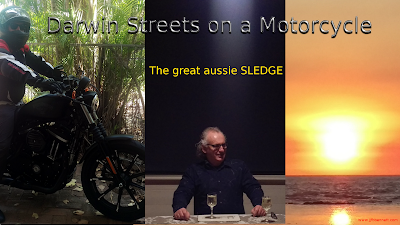 McGuire: In fact I reckon we should start the campaign for a one-person slide next year. Caroline Wilson. And I'll put in 10 grand straight away - make it 20. [laughter] And if she stays under, 50. [louder laughter]
What do you reckon guys? Who else is up there? I know you're in JB?
James Brayshaw: No, yep, Straight in.
Danny Frawley: I'll be in amongst it Ed.
McGuire: Is Duck there?
Wayne Carey: Yes, I'm here mate.
[and later]
Frawley: I'll actually jump in and make sure she doesn't — I'll hold her under, Ed.
McGuire: I reckon we could charge 10,000 for everyone to stand around the outside and bomb her.
Damien Barrett: I'm on Caro's side now, Ed. I'm on Caro's side these days, Ed. [indecipherable]
McGuire: She'll burn you like everyone else, mate. She's like the black widow. She just sucks you in and gets you and you start talking to her and then bang! She gets you.
And then McGuire ends: "It'll be magnificent. I think we should do that next year. It's all good for footy."

Leaders lead
Without doubt great leaders seize the opportunity within the time and the place
Leaders recognise the situation
Leaders recognise the endeavour
I grew up loving Australian rules
However never has the media leaders of Aussie rules been so recalcitrant
They fell into a mindset of pack. Circled their prey and pounced.
They engineered a dialogue of repulsive threat
Passive sexism
Passive violence
In a minute this pack diminished both the charity and women
Oh we were only joking.
And they laughed.
It is about time, the sledge was taken out of the game.
It is about time, the mantra of everything is fair game, is harnessed.
It is about time, that - oh I didn't mean to offend is not accepted.
This attack surfaced and demonstrated collective culture.
That needs to be cut out.
This is about systemic values and leadership.
Cut this culture out from where it gains voice and bring in a new voice.