Is education a global competition? 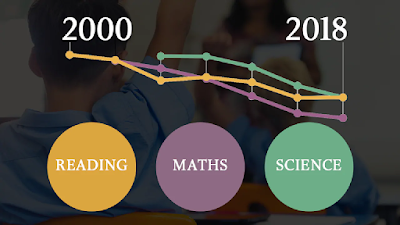 This question is complicated as it pre-states an assumption based on problem identification and action. I am not sure what percent of teachers are aware of the PISA rankings, what percentage are aware of the PISA rankings whilst programing and delivery of service, and what percent of teachers take direct action based on PISA rankings, but I am sure Australian teachers want to improve their professional practice.
Teaching is an overwhelming complex profession firmly based on the dynamics of in-your-face and mind interaction. The classroom is about managing large numbers of micro-decisions per hour. As an administrator, I make fewer decisions per day. It is far from an accident ward, but it is further away from a lecture room in a university. By the end of the day, teachers I work with, are both exhilarated and exhausted by the dynamics of a classroom. I view classroom dynamics more as a small workshop with 25 to 30 bodies and minds busily working away on multiple tasks. The classroom is not a sweatshop, but it is a space of intense activity with a large number of bodies and minds.


I also find teachers are conscious of their professional practice and are keen to improve, innovate, and alter programs to suit the needs of their students. In short Australian teachers are determined to improve learning standards, but I believe improvement is based on professional values rather than external competition. In a sporting sense, teachers are not watching the clock or scoreboard as they focus on their play. I am a firm believer in Hattie’s Visual Learning where improvement in practice can improve student-learning achievement.


Schools have been a function of competition as long as the Australian Tertiary Admission Rank (ATAR) has existed. The pursuit of ‘gold’ through ATAR scores can influence a school’s prosperity and status. The myschool site based on National Assessment Programs results could be influencing where young parents reside and the number of students moving from public to private schools. This could be affecting the socio-economic gap between schools. I can assume that PISA results are not instigating a migration of students from Australian to Shanghai, however, it could slow down the intake of students within International Schools programs from specific East Asian countries.


If anything, the competition belongs as the responsibility of the Federal Education Minister, State and Territory Education Ministers, and Departments of Education (within the operands of our political structures). They are the authorities that have operational spending and decision-making powers to enact change in the best interest of Australia, and Australian states and territories. They provision and enable future strategic directions. It is the people of Australian and states and Territories who collectively rise to the needs of the future.

As a Territorian educator, the PISA results indicate a significant gap between indigenous and non-indigenous achievement results. The article promotes tied funding (Gonski) as the key to close this gap. The article discredits the fundings to the Northern Territory as it is not based on a disadvantage.

It concludes with this statement ‘There is now a real and well-founded fear that this new disparity between the way different states will fund schools - ''Gonski'' and ''non-Gonski'' - will only exacerbate the inequalities between them, as students in rural indigenous schools in the Northern Territory attract less funding than those in NSW, perhaps helping to compound the existence of many ''Australias'' for decades to come’ (Tovey 2013). The statement links funding with achievement and highlights the power of strategic directions within federal, state, and territories educational bodies.

If the article is correct the Federal Government has allocated funding that is strategically defined by global standing (PISA) and is using this global standing to influence states and territories. As states and territories initiate future funded programs, teachers and students are intrinsically entwined within what is ‘the global competition’.
Yes. Australian teachers and students are entwined within a global race, but teachers have set contextual teaching and learning as the primary goal.

Q Gallery Taking Action The Arrival Q Street Q STOP Fortitude Valley Lane with Rabbit Fortitude Valley End of Lane The Flood Gate The Red Flood Gate Sunrise over Story Bridge From God's own country to God's country The High Rise and the Locked Gate Rich Art Poor Art Q1 In 1859 Queen Victoria granted them their own colony Q2 He returned with soldiers and established a temporary settlement Q3 They were enticed by the promise of free land grants Q4 The contributions made towards taming this land for the betterment of society. Q5 And when the Americans arrived, they had the chocolates, the ice cream, the silk stockings and the dollars. Q6 Our leaders demonstrated the actions of those who strive to abide by the biblical truths and to subjectively apply known half-truths.  Q1-6 Collection https://opensea.io/collection/q-gallery The Tourist and Art Collection https://opensea.io/collection/q-gallery Q Weakness My power is made perfect in your weakness Q Arrival and Cogito The arrival
Read more